Gamble.net Casino How to Play Backgammon

How to Play Backgammon

Backgammon is one of the oldest board games in the world and requires a mixture of luck and strategy in order to be successful. A game made for two players, the aim is for one player to be the first to remove all their checkers from the board.

Backgammon is played on a board comprising of 24 narrow triangles that are called points. Each point alternates in colour and is grouped into four quadrants, each of which has six triangles. These quadrants are referred to as the player’s home board and outer board and the opponent’s home board and outer board. Each point is numbered from 1 to 24, with 1 being the first point on a player’s home board, but 24 on the opposing player’s board. The quadrants are intersected by a crosspiece in the middle of the board called the bar.

Play begins with both players rolling one die each. The player that rolls the highest number goes first, using both numbers thrown as their first turn (e.g. if a 2 and a 6 were thrown, the player that rolled the 6 would move their checkers a combined 8 spaces). Players then take it in turn to roll the two dice with checkers being moved one at a time in relation to the number shown on the dice (e.g. rolling a 3 means a checker can be moved 3 spaces).

Players can choose to split the numbers between checkers (e.g. rolling a 2 and a 3 can equate to moving one checker by 2 spaces and another checker by 3 spaces, or moving one checker 5 spaces). Rolling a double allows a player to double the amount shown on the dice (e.g. rolling a double 4 would allow a player to move 16 spaces). A checker must be moved unless a move is unavailable.

Backgammon Board at Start of Play 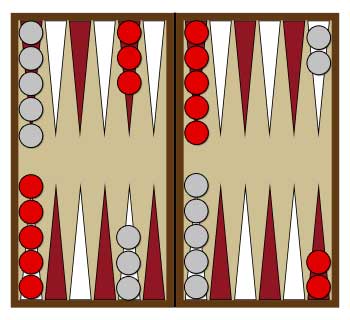 Backgammon Board Showing Direction of Play 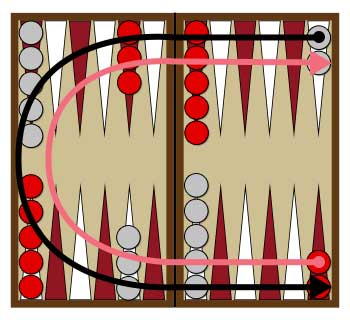 In backgammon, the winner doesn't accumulate points, but the loser can lose points. The defeated player will lose points based on the face value, double value, or triple value displayed on the doubling cube. The doubling cube is a marker rather than a die and starts at 1. A doubling of the stakes can be instigated by a player during their turn, before the dice have been rolled. Should a player wish to double the stakes and their opponent accepts, then the cube is turned to the new number and placed in your opponent's half of the board. The opposing player will then have ownership of the cube and will be able to propose a doubling during any of their future turns. If the offer is rejected by the opposing player the game must be forfeited and the player will lose by the original stakes. Tradition dictates that the stakes cannot be doubled more than three or four times, but further doubling is not unheard of.

There are three varieties of wager that can be placed when playing casino backgammon:

Jump – To win, both checkers must cross the bar after the first roll. Out – To win, both pieces must leave the board after two throws, or three rolls if either of the first two rolls are doubles. Doubles – To win, a player must correctly predict the number or the type of double thrown.

The games starts with two checkers positioned on point one which is two points away from the bar. Wagers are placed and the two dice are rolled by the designated shooter. Both checker are moved in accordance with the numbers that are displayed on each of the dice (e.g. if a 3 and a 4 are rolled, one checker shall be moved three spaces and the other four spaces). Unlike traditional Backgammon, rolling a double does not permit the shooter to double their moves.

Should a player’s first roll of the dice be enough to successfully get both checkers across the bar, the ‘jump’ bet wins. After the second roll, the checker with the furthest distance to go will be moved to in accordance with the larger of the two numbers thrown (e.g. if a 5 and 3 are rolled, the checker with the greatest distance to travel will move five spaces). If either the first or the second throw produce a double, a third attempt is permitted. The checkers must bear off in order for the ‘out’ bet to win.

The odds for each outcome are listed below:

It is important for players to greet each other in a warm and friendly manner, and they should take care to keep the board and the area around it free of any food, drink or objects not used for play. When doubling, a player should gently place the cube in the centre, saying ‘double’ as they do so. The opposing player should reply with ‘take’ before placing the cube on their side of the board.

Both parties should keep score and announce the score at the end of each game. Players should remain silent when the opposing player is making their move. Players should keep a game flowing by avoiding slow play. After each roll of the dice, players must avoid pointing out their own or their opponent’s good or bad rolls. Such actions suggest that the roll is not based on luck and can be seen as poor sportsmanship.

Both parties should keep score and announce the score at the end of each game.

The objective for a player in the game of Backgammon is to remove all of their checkers before their opponent. To do this, there are a number of strategies that can be implemented during a game.

The Running Game sees a player attempt to gather all their checkers into their home board as quickly as possible. This strategy words best when a player has fewer checkers and should be avoided if the opposing player has minimal checkers remaining in play.

The Backgammon Blitz is a strategy that sees a player lay siege to the opposing players checkers with the aim of keeping as many as possible on the bar while simultaneously stacking their own checkers on their home board, therefore allowing their opponent no entry back into the game. This is seen as an all-or-nothing tactic as a player can very quickly lose the game should they fail to maintain the attack.

Where to Play Backgammon

You can play backgammon at Napoleons Casino Bradford, which hosts the West Yorkshire Backgammon group.

In order to be ‘backgammoned’ a player must be unfortunate enough to have all of their checkers left on the board AND have at least one checker left on the bar or in the opposing player’s half. Should this occur, the losing player will be deducted three times the value of the doubling cube.

When a checker is moved to a player’s home board prior to bearing off.

The gathering of two checkers on one point, thereby forming an anchor. An opposing player may not then land on a point which has been anchored.

To move a second checker to a point, or blot, in order to make a point.

To learn about more casino terms, visit the Glossary.