How to Play Sic Bo

Sic Bo, sometimes called Tai Sai or Dai Siu, is a quick-fire game which is played using three dice and offers a fun alternative to games such as craps or roulette. The game’s popularity has exploded around the world over the past few decades due to its fast-paced nature and the fact that it appeals to casino players of all backgrounds.

Where to Play Sic Bo

Sic Bo is offered at the Hippodrome Casino in London, while online players can enjoy Sic Bo at sites such as 32Red.

A Sic Bo board appears quite complicated at first glance, but the game is actually very simple. A dealer throws three dice in a small cage, sometimes called a “shaker”, and players simply bet on what they think the results will be by placing their chips on the layout. There are various different wagers that can be made and they all have different payouts based on the odds of the numbers being rolled. The main bets are: 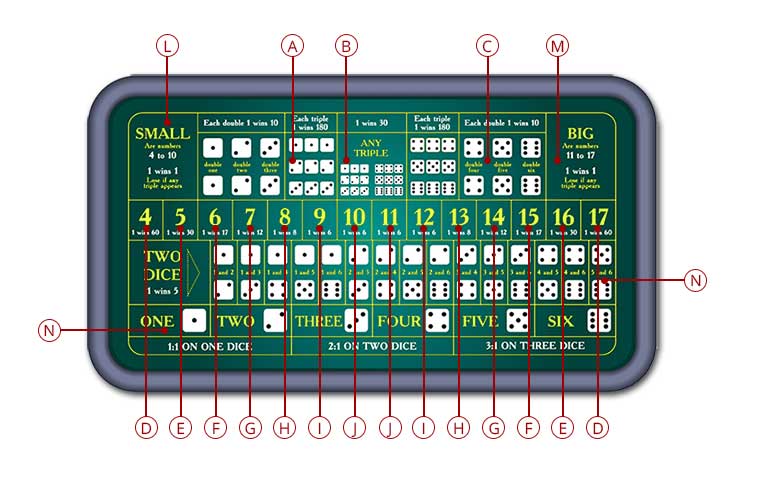 As Sic Bo has spread worldwide from its origins in China, some of the traditional behavioural habits of players have also changed, but a table can still get quite crowded and a bit of physical contact may not be frowned upon as it would be during certain other casino games if you need to find room to place your bets.

However, you should not get carried away and it is best to act in as dignified a manner as possible, respecting the other punters and casino staff. Make sure to place bets at the right time and avoid trying to put down wagers during a live round as it will only slow the game down.

There are some traditional superstitions associated with Sic Bo. It is considered bad luck to touch another player’s shoulder or count your money while in play. However, players wishing to give themselves a bit of good luck can wear red at the tables, with some punters even wearing red underwear beneath their normal clothes for an extra boost of good fortune.

Understanding the odds behind a game is the key to any casino strategy, and in Sic Bo the bet with the most favourable chance of success is the big/small option. The payout of 1:1 may not sound the most appealing but the odds are close to 50-50. The house edge comes from the fact that any triple counts as a loss.

As the odds of success are close to 1 in 2, many Sic Bo players like to employ progressive betting strategies, which aim to guard against the risks of losing sequences by altering the size of the stake from one round to the next. One example is the d’Alembert model, where a player increases their bet by 1 after every loss, and reduces the wager by 1 after every win. The pattern ends when the required bet is zero and then begins again.

Another Sic Bo policy favoured by some players is to combine bets in an effort to maximise the chances of winning. For example, at the same time as betting £2 on big, you also bet £1 on Double 1. The big bet will win almost half the time and Double 1 will win almost 7% of the time, so statistically you have a 55.56% chance of winning on all wagers.

There are many different variations of Sic Bo and one of the most popular versions is Chuck-a-luck, which is also sometimes known as ‘birdcage’ or “sweat-cloth’. It is basically the same game but with fewer options, which makes the game simpler to play and understand for many players, but removes some of the fun for others. The layout of a Chuck-a-luck board reflects the differences inherent in the game and does not appear to be as “cluttered” as a regular Sic Bo board. There are no dice printed on the felt; instead, the top of the layout features the numbers from one to six while the bottom centre of the layout features numbers five to 16. Odd/even and high/low bets are printed on the sides. Three dice are held in a shaker resembling a birdcage, hence the nickname, and are rolled as players bet on the winning combination.

In Chuck-a-luck, players can make bets on single numbers just like in Sic Bo, but combination, three-dice total and double wagers are not included. It is usually possible to bet on big or small or any triple, while a field bet is also sometimes offered where players have the chance to back a range of numbers. For example, a bet would win if the total thrown is outside the range of eight to 12.

A device used to hold the dice and mix them up prior to being rolled.

A type of bet that can be found in Chuck-a-luck. The payout is even money if the three-dice total is within a certain range.

Strategies which are implemented over a series of bets and involve altering the size of a wager from one round to the next. Progressive systems are popular in any game involving even money bets as they try to counter the risk of losing sequences. One example is the Martingale method, where players double their wager after each loss until they win.

Visit the Casino Glossary for more terms which you might find are used when playing Sic Bo and other table games.