Gamble.net Casino How to Play Craps

How to Play Craps

Sometimes known just as “dice”, craps is an exciting game which has kept casino lovers entertained for generations and is still a favourite today, as players take to the tables to make bets on how the dice will roll.

The game is played using two dice and takes place on a specially designed table encircled by a small rubberised wall. The table is laid out with a felt cloth and marked out with different sections which denote the various betting options available. Players make wagers by placing chips on the corresponding section or having their chips put there by the dealer.

Around each craps table there are typically four members of staff. Two dealers are responsible for all bets made on their half of the table, a boxman supervises events and a stickman controls the dice, using a flexible stick to move the dice towards the next player. 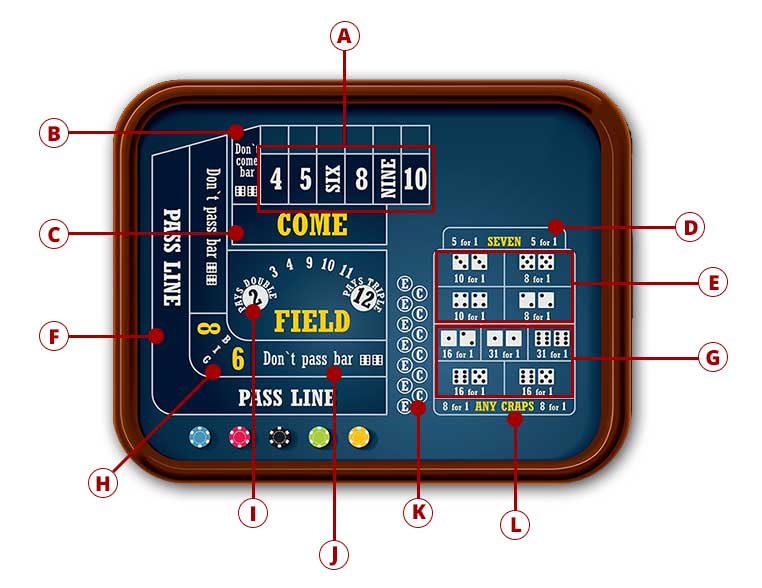 Where to Play Craps

Many land-based venues, such as the Hippodrome in London or Grosvenor Casino Westgate in Leeds, have craps or dice tables available.

You can also play craps online at William Hill. Play for free to get acquainted with the game and then dive in to roll the dice and try to beat the tables.

There are lots of different wagers that can be made, and the table might seem complicated to new players, but it is more straightforward than it initially appears. The main bet to be aware of is the Pass Line bet, which happens when a new player takes their turn at rolling the dice. Whoever throws the dice is known as the shooter and their first go is termed a ‘Come Out’ roll. If the shooter throws a 7 or 11, the Pass Line bet wins, whereas if they throw a 2, 3 or 12, the Pass Line bet loses. It is also possible to bet on ‘Don’t Pass’, where the reverse applies and you lose if the first roll is 7 or 11.

A 4, 5, 6, 7, 8, 9 or 10 is known as establishing a point, and players can then start to bet on whether the shooter will make their point or not. Once a point has been established, a Come bet can be made which works in the same way as a Pass Line bet. The player will keep rolling until they throw the same number again and pass (or win), or throw a 7 (and lose). The same player will carry on rolling as long as they continue to make winning rolls.

To win a Pass Line/Come Bet

To lose a Pass Line/Come Bet

A craps table can be the most raucous area of a casino, as players can all win rather than compete against each other or play one-on-one with the dealer. For that reason, there is nothing wrong with getting excited and cheering with the shooter, as long as you don’t get too carried away. Betting against the shooter has a similar house edge, but players generally prefer to stick together and bet on Pass Line or Come. If you bet against the shooter, you miss out on the sense of camaraderie that can build around the table and may be seen as the enemy, especially if you are quite vocal, so it is best to keep a low profile if you do decide to bet this way. Other tips on etiquette include:

The issue of controlled shooting has been debated through the years, as there are occasions when players do consistently roll the same number and go on hot streaks. Craps fans may try to perfect a method where they grip the dice in the same way and try to throw them the same every time, but it is best to view each roll of the dice as producing a random outcome, and so it is important to understand dice odds as you consider your strategy.

Sticking to Pass Line betting is not a bad strategy, particularly for beginners, but players can then go on to ‘take the odds’, which has no house edge. For example, if the established point is a 6 or 8, you can bet that this number will be rolled again before a 7. Statistically a 7 is more likely to be thrown so players are paid out at true odds of 6 to 5. If the point is a 4 or 10, the odds are even better at 2:1. It is a good idea to place the maximum allowed bet on the odds, which varies between casinos but may be two, three or four times the size of your Pass Line bet, depending on the point.

Proposition bets generally have the highest house edge of all craps wagers and are best avoided. They are disguised as a fun way to make a different type of wager and do offer some big rewards, but the odds are against you. For example, you can bet on Any Seven being thrown next at a payoff of 4:1, but the odds are actually 5:1. Throwing Snake Eyes (2) or Boxcars (12) is a 35:1 chance, but the house will only pay out 30:1.

The first roll a shooter makes to start a round of play.

When the come out roll is two, three or 12, anyone who bet on the Pass line loses.

The main bet in craps. If the shooter throws a 7 or 11 on their come out roll, the Pass Line bet wins.

Sometimes known as service bets, these are any wagers that can be settled with just one roll of the dice, for example a bet on any seven, a field bet or a bet on a particular combination.

After a point has been established, the player must roll the same number again before a 7 to win. If a 7 is rolled before the point, they lose and have ‘sevened out’.

The player who is rolling the dice.

Bets without any house edge, which allow players to bet on the point being hit again before a 7 at their true odds.

All craps combinations have their own nicknames, and can be remembered as below:

Visit the Casino Glossary for more terms which you might find in craps or other casino games.