Gamble.net Casino How to Play Mahjong

How to Play Mahjong

Mahjong can trace its roots back to nineteenth-century China, although it was banned in its home country after the Chinese Revolution of 1949 following a crackdown on gambling activities, and only reappeared in the mid-1980s. The game spread across the world in the 1920s, with versions of the game played in casinos to this day.

Although there are many varieties of the game, you will usually find 144 tiles in a standard mahjong set. There are three suits - circles (sometimes called dots), bamboos and characters and, within each suit, there are four sets of nine tiles numbered 1 to 9. The tiles numbered one and nine are the ‘major’ tiles, with those falling between referred to as ‘minor’ tiles.

When playing under casino mahjong rules, the aim of the game is to create a winning hand worth more than a minimum number of points decided in advance by matching your tiles into combinations. At the beginning of a game, the tiles are placed face down and shuffled before players place two rows of 18 tiles in front of them, known as the wall. The empty space in the centre of the table is called the well and is where players place their discarded tiles.

The dealer is determined by the roll of the dice and is initially known as the east wind, which is the prevailing wind for the first round, with the other players are designated as the south, west and north winds going counterclockwise around the table. Once the first round is played, the player to the initial dealer’s right becomes the east wind and deals. When all four players have dealt as the east wind, the south becomes the prevailing wind, then the west and finally the north. There are 13 tiles distributed to each player, who can start trying to sort them into certain winning combinations called kongs, chows and pungs. 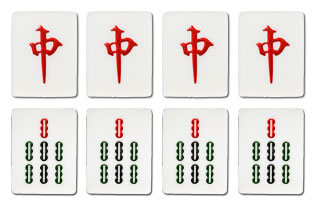 If you find four identical tiles in the same suit, you have a kong. 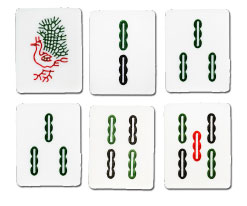 A chow consists of three consecutive numbered tiles (such as 2, 3 and 4) in the same suit. 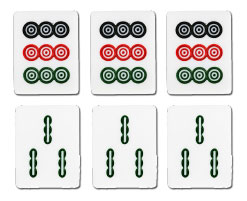 You need three identical tiles in the same suit to complete a pung. 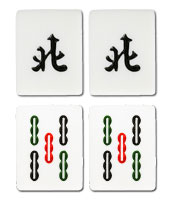 You need Two identical tiles in the same suit to complete a Pair, known as Eyes.

The dealer begins with 14 tiles and immediately discards one to begin the game. They roll the dice to determine where to break the wall and, going round in turn counterclockwise, players pick a tile from the wall, discarding another from their hand into the well. You should always have 13 tiles in your hand, unless you find one that completes a valid hand, meaning you can shout “mahjong!” to claim victory.

You can also pick up discarded tiles from the well if they would help you complete a pung or kong, but to do so you must shout the name of the combination it will complete. If a player discards a tile that could complete a combination you can immediately call for it, although another player can outrank you and take the tile instead if it would help them complete their hand or make a higher value combination than it would for you.

Priority when picking up discards is given to those who could win the game by taking the tile, followed by those who could form a pung, then kongs, with chows trailing them. If both or all of the players who wanted the tile need it to create a combination of equal value, the player closest to the right of the discarder takes the tile. If the tile is won by a player not directly to the right of the discarder, the play continues from them, meaning others may miss their turn. You can only claim a discarded tile to complete a chow if it was given away by the player to your left.

In addition, the player who receives the tile has to display the combination for all to see, helping the others work out the type of hand they are building. This is termed ‘exposing’; combinations made from tiles dealt or taken from the wall stay in your hand and are referred to as ‘concealed’. If a player wins the game from a tile that was discarded, the player who gave it away has points deducted.

You win a round of mahjong by creating a hand comprising four combinations and a pair and shouting “mahjong”. If one of your combinations is a kong, you will only have a single left over, so you can take an extra tile from the back end of the wall to help create a pair. It is worth noting that the player to make mahjong does not necessarily always score the most points and therefore might not necessarily win the most money from the game.

If all the tiles from the wall are taken before anyone makes mahjong, there is no score and the round is played again with the same dealer.

There are numerous different scoring systems available for mahjong, which is an important feature of the game that should be agreed on before it takes place. Chows do not score points, but they do help you complete your hand. If you pick up four chows you could easily win the round but receive little reward for it.

Concealed pungs, those completed using tiles from the wall, score higher than exposed pungs - those created with discarded tiles - and those comprising major tiles are more profitable than those involving minor tiles. Wind or dragon tiles score even higher. The same rules apply for kongs, which score more than pungs.

Extra points can be awarded based on the pair that completes your hand, with two dragons, two tiles or a pair of the wind that was designated to eventual winner at the start of the game often increasing their tally.

There are also bonus points that can be applied to the winner’s hand only (e.g. for having no chows or winning with the last possible tile), as well as extra points for various achievements in any player’s hand (e.g. owning a hand of just one suit or holding a pung or kong of any dragon).

Your score is doubled if you win from picking a tile from the wall, with your opponent paying you double the score if you make mahjong from a tile they discarded.

Some players like to include the optional flowers and seasons in the game, which can provide a handy points boost. After the break in the wall has been established, you separate the first 14 tiles counterclockwise from the break and keep these as a standalone ‘kong box’ from which you can replace the flowers and seasons. It also provides the additional tiles needed to form a pair if you have declared a kong.

If you receive a flower or season, you must expose it and take another tile from the kong box. You receive four points for it at the end of the game, with the chance to double your score if you hold your own flower or season. East wind owns the flowers and seasons with the number one, south owns two, west owns three and north owns four.

You double your score twice if you end up holding all the flowers or all the seasons.

It is appropriate to name the tile you are discarding to give everyone a chance to evaluate quickly whether it would useful in their hand. You should also let other players know when you are one tile from completing your hand by stating “one for mahjong”, to inform them they should be cautious with their next moves.

If you are spectating at a game, you should avoid commenting on the contents, or potential contents, of any player’s concealed hand.

Consideration should be paid to your tiles before play begins and you need to work out straight away what is required to win the round. If you could feasibly make mahjong in just a few moves, it is best to play aggressively for the win. The more moves you think it might take you, you more defensively you should play, in the hope that the tiles run out before anyone else calls “mahjong”. When attempting to see the game out, you should be very careful about discarding potentially valuable tiles such as dragons and winds that are not your own.

Due to the fact you have to declare the combination you are making when you pick up a discarded tile, thus giving away details about your hand, you should think carefully about whether you want furnish other players with that information. Sometimes it pays not to create combinations too early as it could also leave you with odd tiles that don’t fit together at the end.

Tiles bearing four, five and six are good ones to keep in your hand for making runs of numbers; discarding them could give your opponents an advantage over you. Make sure you take note of what each player picks up as it could inform your later decisions.

It also pays to take note of the scoring rules for that particular game. With so many different guidelines, owning certain tiles can be more valuable in one game than in another, so make sure you know what will maximise your score after mahjong is made.

Where to Play Mahjong

Mahjong is played in casinos around the world, including Napoleons in London and Genting Liverpool.

A hand which yields no points.

The pair of tiles used to make up a winning hand.

A name sometimes used for the combinations that make up chows, pungs and kongs.

The term given to the wind designated to the dealer. The first time the game goes round the board and everyone has dealt, the prevailing wind is east. It then becomes south for another round, then west and north.

A hand held by a player that needs just one more tile to make mahjong.

In addition to the traditional way of making mahjong, there are certain extra combinations that can win the game. However, not all games recognise the same special hands, so ensure you know by which rules you are playing in advance.

You can find more casino terms at the Glossary page.